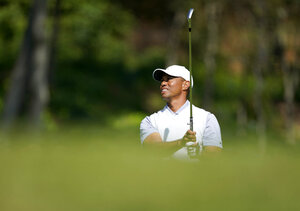 LOS ANGELES (AP) — Thousands of fans gathered around Tiger Woods in the left rough to see if he could avoid yet another bogey Friday in a round that made a bid for his first victory at Riviera and the record 83rd of his PGA Tour career a lot tougher.

Just beyond the green, hardly anyone noticed as Adam Scott faced a short par putt on No. 18 to complete a bogey-free round in the Genesis Invitational and match his best score ever at Riviera.

Scott returned from a two-month break with a 7-under 64 that left him one shot off the lead among the early starters in the second round. Woods lost three shots on two swings with a wedge in his hand and stumbled to a 73 that left him certain of making the cut, but little else.

“I made some pretty bad mistakes out there,” Wood said. “One ball in the fairway with wedge in my hand and another one with a sand wedge in my hand, and played those two holes in 3 over. Not very good.”

Harold Varner III put together five birdies in his round of 68 that gave him a one-shot lead over Scott, Sung Kang (67) and Vaughn Taylor (67) among those who had the advantage of morning conditions.

Matt Kuchar, who opened with a 64 for a three-shot lead, and Rory McIlroy were among those playing in the afternoon.

Scott hasn’t played since he won the Australian PGA Championship three days before Christmas. He is careful with his playing schedule, wanting to starve himself from competition so his motivation stays fresh. His game was slightly rusty in the opening round, and then he put it together Friday.

Along with his seven birdies — four in a five-hole stretch on the back nine as he was making the turn — he saved par all five times he had to scramble.

“You’re never quite sure coming off eight weeks how it’s going to feel, but I was really hitting the ball out of the middle of the club,” Scott said. “That gave me a bit of confidence to just kind of keep doing what I’m doing and it all fall into place rather than go in search for what I’m doing wrong.”

Woods didn’t have to search long to figure out his errors.

He started well enough with a smart choice to hit iron on the reachable par-4 10th because of the back right pin position, a wedge into about 12 feet and a birdie. And he was never in too much trouble. The 15th hole did not appear to present any problems, especially after Woods crushed a 335-yard drive to the middle of the fairway.

He hung his head immediately after a chunked pitching wedge that plugged into the bunker short of the green, leaving no shot to a front pin. He blasted that through the green, chipped back to 7 feet and missed putt for double bogey.

“I just hit it fat,” he said. “Honestly, I was just trying to cut a little wedge in there and get it up in the air.”

After two birdies on the par 5s around the turn — Nos. 17 and 1 — Woods gave away another shot with sand wedge from light rough into the front bunker on No. 3 for bogey. He bogeyed the par-3 fourth, and then he three-putted from about 50 feet up the slope on the par-3 sixth.

He was in the middle of the pack when he finished, and with glorious weather in store for the rest of the week, Woods faced a lot of players ahead of him while trying to make up ground on a course where it’s tough to avoid mishaps.

Jon Rahm, one of three players who can reach No. 1 in the world this week, knows that feeling.

He popped up his 3-wood on the 10th hole to start his round and was so far right he stared toward the green before realizing he had nowhere to go. He purposely aimed well left of the green and ran it over the back. The idea was to make par, but hitting into the bunker behind the green wasn’t part of the plan. It took a superb bunker shot for a bogey.

Rahm was steady the rest of the way for a 68 to stay in range,

It’s a better spot than Justin Thomas, who won’t get another crack at Riviera this year. Thomas opened with a 74 and never got anything going in the morning. He didn’t make a birdie until his 16th hole and shot 71, missing the cut for the second time in his last three stars.

Woods figured he would be teeing off Saturday morning on the back nine.

“I’m so far back right now — about 40 guys ahead of me — I’m going to have to make some birdies this weekend,” he said.

Friendly to Fiers: A’s pitcher gets cheers in spring game

Grizzlies: Jackson out at least 2 weeks with sprained knee