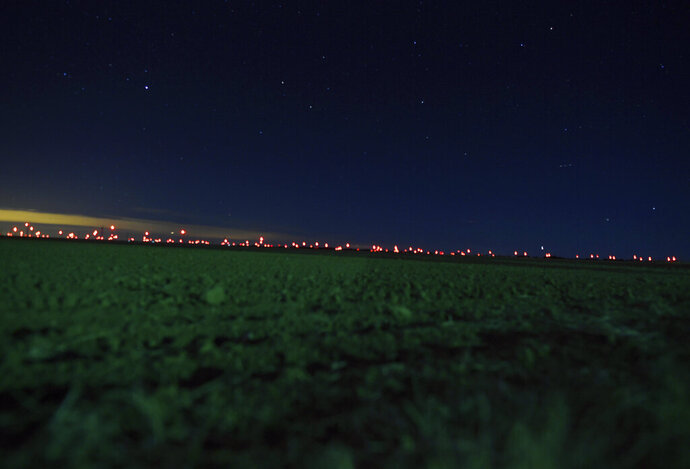 Authorities in Colorado have tried to put those theories to rest, announcing that they have confirmed nothing unusual or criminal about dozens of weird drone reports since November. They were mostly hobbyist drones, commercial aircraft, stars, planets and weather phenomena.

Yet if history is any guide, the investigation that used a heat-detecting plane in Colorado’s mystery-drone highway, with sightings that stretched into Nebraska and Wyoming, will settle nothing for many people.

Speculation persists about drones said to be as big as cars, flying in groups in grid patterns at night.

“Even if the military has plausible deniability with this, defense contractors might be involved,” Dan Carlson, a drone-spotting retired meteorologist in western Nebraska, said Tuesday. “By the time they ‘fess up to it, they’ll have been in sky for four years.”

Four times this year, Carlson said, drones have flown after dark near his farm outside Sidney, Nebraska.

Drones flew in pairs on two nights, he said. Their speed, impressive range — over the distant horizon without landing — and proximity to nearby missile silos makes him suspect the U.S. Air Force at least knows of the flights.

Uncertainty, if not paranoia, has proliferated about such sightings. Just don’t count Carlson among those peddling out-of-this-world explanations.

“I do not buy into the conspiracy theories. I am not living in fear of an alien invasion,” he said.

He speculates the drones may be involved in some kind of military search-and-recovery practice, pursuing items hidden around the countryside during the daytime for training exercises at night.

F.E. Warren Air Force base in Cheyenne, Wyoming, oversees 150 Minuteman III nuclear missiles in silos scattered across the prairie in the three-state region. The missiles need regular checking, maintenance and protection against threats, yet Air Force officials insist the drone reports have nothing to do with them.

“Our base is kind of a drone no-fly zone. So we do have counter-UAS — unmanned aerial systems — training that goes on within the confines of this installation. But any drones spotted outside this installation are not part of our fleet,” said Lt. Jon Carkhuff, a base spokesman.

Base personnel haven’t seen any of the purported drones, he added, but they are cooperating with the Federal Aviation Administration and FBI.

In northeastern Colorado, the agency found:

— Of 90 drone reports received from Nov. 23 to Monday, 14 were smaller-sized hobbyist drones.

— Of 23 drone reports between Jan. 6 and Monday, a period that involved flights of the heat-detecting plane working with investigators on the ground, 13 were smaller hobbyist drones, stars or planets and six were attributable to known commercial aircraft or atmospheric conditions. Authorities weren’t able to identify fliers of the hobbyist drones.

— Four confirmed sightings of the 23 were unidentified.

— A drone reported to have flown near a Flight for Life medical helicopter during daytime didn’t appear related to the recent sightings. Investigators couldn’t confirm a violation occurred.

Colorado has over 24,000 registered drones, and pilots reported over 2,200 drone sightings in Colorado to the FAA in 2018, state officials said in a news release.

He followed the drone for over 10 miles (16 kilometers). Others he saw fly over the horizon, which he estimated was at least 20 miles (32 kilometers) distant over the sparsely populated area north of Sidney, Nebraska.

“It was the kind of night that if an airplane flies over at 30,000 feet, you hear it. No sound with these,” Carlson said.

The FAA is still looking into the reports, spokesman Ian Gregor said.

“We take every drone-sighting report seriously. Multiple FAA divisions are continuing to work closely with federal, state and local stakeholders on this issue,” Gregor wrote in an email.

The Colorado Department of Public Safety plans to scale back flights of the heat-detecting plane to try to confirm reports as they’re made.

“So we do encourage the public that if they do see something suspicious, to please visit our website and file a report,” Trost said.

Coming around again: Famous ice disk seems to be re-forming

Grandpa forgot something: $43,170 found in footstool

May sees many changes in 30 years as VB mayor

Mitec to close this fall